Over the last couple of years Insurance has generally been a profitable and busy area for law firms around Australia. The volume of legal work has been particularly stark at a time when the Corporate, Banking and Property practice areas have been slow to recover from the GFC.

However lawyers servicing the insurance industry area have had their fair share of challenges, and the differing ability of various law firms around the country to properly respond to the changing face of the industry has led to a significant number of Partner and team movements in 2013 and 2014 so far.

The major trend we have observed over the last couple of years has been pressure from the major Australian insurance companies, on their law firm suppliers, to provide them with national coverage.

Some see this simply as the latest stage of a cycle: a number of years ago the insurers pushed for their legal suppliers to service them across the country. However there was later a realisation that quality local firms often could often deliver a superior product, with deeper relationships with local claims managers and insight into the local business, at a sharper price point.

This pressure changed the face of the legal services insurance market in Australia (particularly due to cost pressures on charge-out rates) leading to the situation of the last few years categorised by three developments. Firstly national law firms either divested themselves of their insurance practices, or had their insurance practices move away to start up their own boutique law firms, such as Wotton + Kearney and later YPOL, coming out of Phillips Fox, Gilchrist Connell out of Thomson Playford, and Kennedys out of Minter Ellison, to name just a few.

Now it seems that the insurance market has shifted again. The large Australian insurers appear to be trying to move away from overly complex panel arrangements consisting of a raft of legal providers across various states. With procurement departments becoming more heavily involved in the tender process, and the preferences of individual claims managers often sidelined in the interests of streamlining, the move has very much been towards having a much smaller number of law firms on the insurance companies' legal panels. Those who make the cut tend to be law firms which can service the insurers across multiple jurisdictions, multiple classes of insurance, or in some cases other areas of law (such as banking work for Suncorp).

This has led to a sense among the insurance-focused law firms that they need have interstate offices - or at least a token presence - and they need to be willing to service other insurance classes (both statutory lines as well as liability & indemnity) in order to retain and secure their place on panels.

While firms such as HWL Ebsworth, Moray & Agnew and Sparke Helmore had already established national coverage across various insurance classes over the last few years, the trend of boutiques to expand interstate has accelerated rapidly over the last twelve months. A year ago we reported on the beginning of the trend, at that time pointing out Wotton + Kearney and CBP Lawyers' moves into Melbourne. Since that time both firms have opened offices in Brisbane.

Brisbane has been a bit of a hot spot in fact. On top of the Wotton + Kearney and CBP openings, Lander & Rogers has moved into the Queensland market and Clyde & Co have indicated in the press ambitions to open an office in that state.

As well as that, a number of Brisbane-based firms have headed south, with Barry.Nilsson, Carter Newell and McInnes Wilson all opening offices in Sydney. Adelaide & Sydney based Gilchrist Connell has also established a foothold in Perth. And we know of a number of other boutique insurance firms currently weighing up their options in terms of a more national footprint.

However there are a few firms attempting to buck the trend by pitching to their insurance clients that they will fly the relevant partners and lawyers out to whichever state in Australia the client needs work done, and not charge the client for travel, accommodation etc. This is in order to stay on the panel.

The rationale is that some insurers are centralising their operations, so why not have their providers do the same thing? The jury is out on whether this in a loss-leader, or will in fact prove profitable for the law firms in question in the long run.

Global firms coming into Australia have also had some influence on the shape of market. Notably:

There has been talk of other international insurance specialists looking at Australia, but no sign of their entry yet. Either way, it seems with the corporate, banking and property legal markets still in the process of recovering, while the volume of insurance-related legal work in Australia has continued to be high, the stage is set for more movement in insurance in 2014. 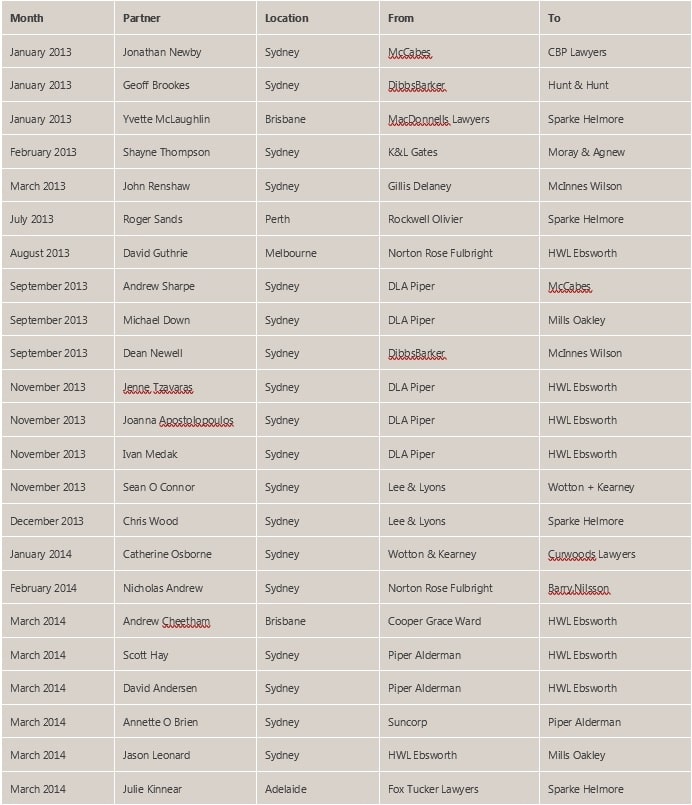