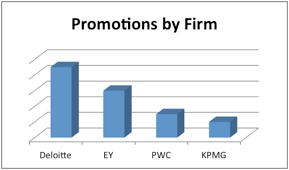 The Internal Audit and Risk Market has remained buoyant throughout 2013/14 as the lasting impacts of the financial crisis have increased focus on risk from both regulators and the market.  Added to this, the further entrenched we become as an economy into the digital and information era the more need there is for Cyber and IT risk professionals.

Reflective of these trends, the Big 4 appointed 12 Partners in the Risk space and a further five in IT Risk and Cyber Security.

Deloitte once again lead the way and promoted heavily into this area with nine new partners, as their footprint in Australia continues to expand.

Interestingly, unlike in most other practice areas, EY appointed the next highest number with six being introduced to the partnership nationally.

Sydney was by far the busiest hub in terms of partnership promotion with over double that of Melbourne.  This was surprising given Melbourne's position as a financial and corporate centre.

Adelaide and Western Sydney, two SME driven markets, were the only locations to have Partners with combined Internal Audit and Risk capabilities reflective of the SMEs needs which can suffice with the two functions combined. ​ 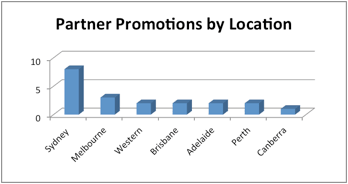