Attack of the bean-counters

CONSULTING has its Big Three; accounting the Big Four; and executive search a Big Five. But there is no corresponding clutch of dominant law firms. None has amassed as much as 0.5% of an industry with global revenues of around $650 billion a year. Even the biggest law firms may be 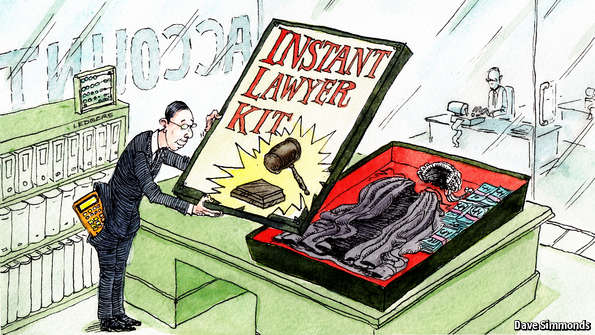 anachronistically inefficient. They are run by lawyers, not professional managers, insist on charging by the "billable hour" rather than by results and use little technology more advanced than e-mail.

Nonetheless, most big law firms have continued to be highly profitable.

In recent years, clients have begun to rebel against the billable hour, and at being charged senior lawyers' rates for work done by juniors. Some have started sending basic legal paperwork to cheap, offshore processing centres. But only now is a serious threat to the law firms' cosy existence emerging.

It comes from none other than the Big Four accounting networks (Deloitte, EY, KPMG and PwC), whose combined annual revenues of $120 billion exceed the $89 billion generated by the 100 largest law firms combined (see charts). Having already dipped a toe into the legal business a couple of decades ago, only to retreat, the accountants have been stealthily building up legal-services divisions.

These have now reached a size where they outgun most law firms: by headcount, PwC's legal arm is the world's tenth-biggest, and all four networks' law divisions are in the top 40 by this measure.

The accountants insist that they do not want to compete with law firms, and that legal services will remain a small chunk of their revenues in the medium term. So far, they have focused on mid-tier, process-oriented work rather than the big deals and lawsuits that elite law firms chase. Moreover, regulation has restricted their growth: they cannot practise law in America, which accounts for over a third of global legal spending, and most European countries restrict their freedom to do so. Only a few countries allow full integration of accounting and law firms (see table). 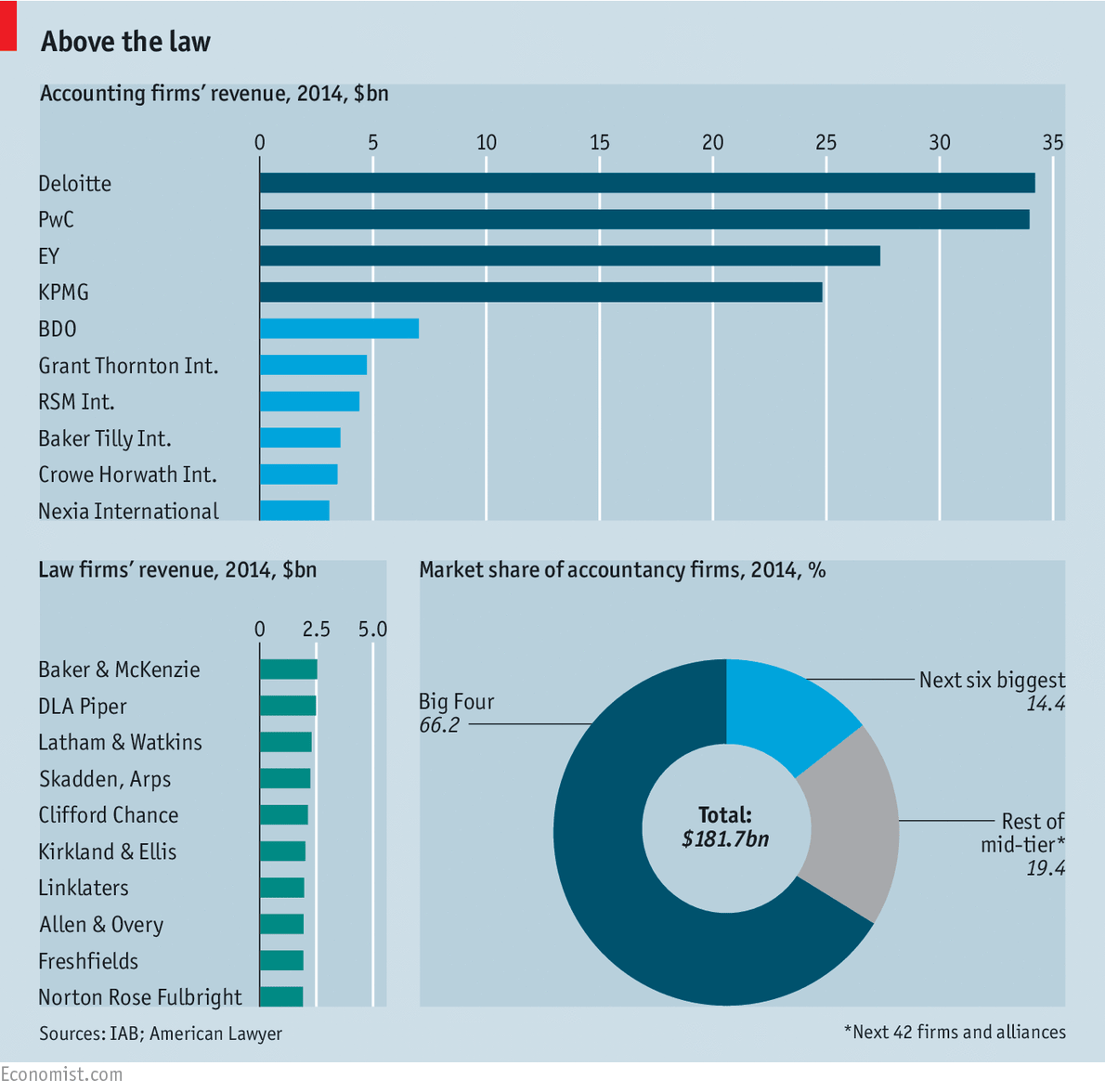 Nonetheless, as the accountants run out of room to grow in other businesses, they will have trouble resisting this inefficient and lucrative market. And the law firms will find it hard to fend them off. To Michael Roch of Kerma Partners, an outfit that advises professional-services firms, the Big Four are "the biggest underestimated threat to the legal profession today".

The idea of accounting firms doing legal work is hardly new. The Big Four have long employed lawyers to work on European clients' tax returns. In the 1990s the then Big Five, led by the late, unlamented Arthur Andersen, sought to diversify from auditing and tax by expanding into both consulting and law. With America off-limits, all but Deloitte founded or acquired law firms in Britain.

That trend ended abruptly when the Enron scandal took down Andersen in 2002. Garretts, an English legal practice it had affiliated with, suffered a harrowing dissolution, in which its staff had to find new jobs and its partners faced personal bankruptcy. Observers attributed Andersen's demise to conflicts of interest between its consulting and audit arms. The accountants' legal divisions were seen as presenting similar risks. Moreover, the Sarbanes-Oxley corporate-governance reform America passed in the wake of the scandal transformed the business environment for the surviving Big Four. Besides restricting the auxiliary services they could offer to audit clients, it granted them a windfall in new regulatory work. In response, the accountants mostly closed or sold their non-tax legal practices.

Over the following decade, however, incentives increased for the firms to revisit their abandoned experiment. Revenues in their audit and tax divisions flatlined, forcing them to seek new business lines to keep growing. As their corporate clients globalised, the Big Four's international scale—together, they employ about 700,000 people in more than 150 countries—became an increasingly valuable selling-point.

The recession following the 2008 financial crisis prompted businesses' general counsels to rebel against the padded bills they get from the law firms they use. In the same decade, several countries passed laws opening up their legal industries. Britain and Australia authorised "multidisciplinary practices" (MDPs), which let attorneys share profits, without restriction, with members of other professions. So, the Big Four moved back in, buying small law firms, poaching partners from others and recruiting on campuses. With the flexibility to offer discounted, fixed fees, they started to win lots of corporate legal work. In recent years the quartet's combined legal revenues have grown at double-digit rates.

Since 2013 EY Legal has expanded from 23 countries to 64. It merged with a Chinese law firm, Chen & Co, and hired a partner from Freshfields, one of the "Magic Circle" of posh London solicitors. In 2012 Deloitte scooped up Raupach & Wollert-Elmendorff in Germany, while PwC recently took over an immigration-law boutique, Bomza, in Canada. KPMG was the first of the four to register an MDP in Britain, which lets it give its lawyers there full-fledged partnerships in the firm. Now, as a proportion of the combined revenues of the ten largest firms in each country, Kerma Partners calculates that the Big Four's aggregate market penetration ranges from 4% in China and 6% in Britain to 20% in Germany and 30% in Spain.

The Big Four are taking a more focused approach this time. Rather than building full-service firms, they are concentrating on areas of law that complement their existing services: immigration, which sits nicely with expatriate tax work; labour, which goes with human-resources consulting; compliance; commercial contracts; and due diligence. So far they have resisted taking on the priciest law firms for high-value work on capital-markets transactions or mergers and acquisitions. They are also steering clear of non-tax litigation, which could result in them suing potential audit or consulting clients. But they are seeking to build broader practices in under-lawyered emerging markets where the international law firms do not have a presence but the accountants do. 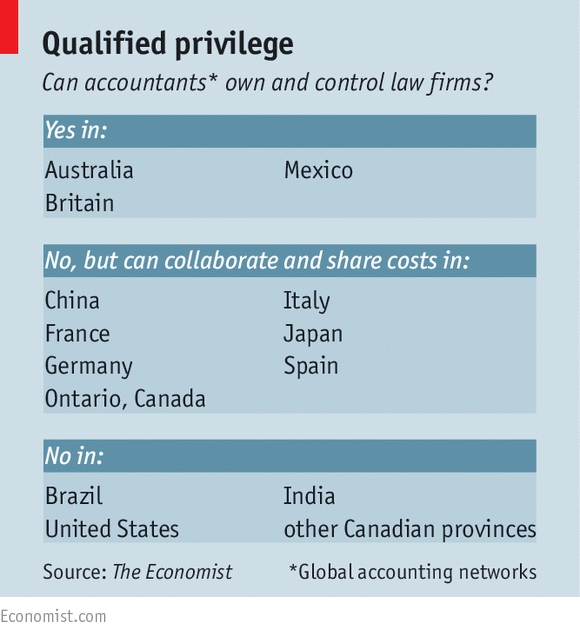 For now the Big Four seem content with stealthy growth. By tiptoeing around the strongest firms, they have planted a flag on the margins of the profession without setting off alarms. "I don't think we disrupt the existing law business that much," says Leon Flavell, the head of PwC Legal. But his goal is to more than double its revenues by 2020, to $1 billion a year. The legal business is not growing fast enough for PwC and the other three accounting giants to reach this sort of turnover unnoticed. Eventually, they will go head-to-head with law firms.

So far, law firms have been sanguine about this looming risk. Those in America can afford to be complacent: the accountants' lobbyists are too busy advancing the interests of their existing businesses to push for an opening of the legal profession. Even if they tried, America's legislative bodies are infested with lawyers, who would surely fight back. This should ensure that the market remains protected for the foreseeable future. Similarly, the Magic Circle firms in London can rest easy for now: Europe's finest lawyers can still name their price for the most challenging, "bet-the-company" work.

Those most at risk from the attack of the bean-counters are the profusion of mid-tier legal firms in liberalised markets. Since their profit margins are already low, they cannot afford even a modest loss of market share. Unfortunately for them, much of their business is high-volume, repetitive tasks—just the sort of work that the Big Four excel at standardising and automating.

Most of these vulnerable law firms have been slow to react. That may be because their clients are telling them not to worry: in a recent survey by American Lawyer magazine, 90% of companies' general counsels did not think their business would buy legal advice from an accounting network. However, those general counsels may themselves be cut out of the loop, as the Big Four sell their companies' finance departments a "one-stop shop" service, with legal work bundled together with consulting and tax filing.

A handful of innovative law firms have tried to "self-disrupt", to pre-empt new entrants. In 2011 Allen & Overy, a Magic Circle member, set up a service centre in Belfast to handle routine aspects of big deals. It now employs almost 400 people there, including 70 lawyers, at a fraction of London salaries and rent. At the other end of the market, in recent years groups of mid-tier firms across the globe have linked up to form loosely integrated networks. In January Dacheng of China joined a Western confederation, Dentons, to create an alliance that employs 6,600 attorneys.

Although the giants of the legal world have sought to mimic the accountants' cost and scale advantages, they remain minnows compared with the Big Four. Only the likes of PwC and Deloitte can muster the capital and technology (and relatively cheap labour) to industrialise the artisanal model of legal practice that has endured so long. Businesses that spend heavily on legal advice stand to save a fortune. But law firms that are sub-scale and inefficient risk ruin. The Walmarts and Amazons of professional services are at their gates, and the legal industry's halting pace of creative destruction is set to accelerate as a result.

Reprinted from "Attack of the bean-counters" at The Economist.