By CKG with Royal Mail UK

CARLYLE KINGSWOOD GLOBAL talks to Royal Mail’s Group General Counsel, Maaike de Bie, on how the transition from public to private sector has 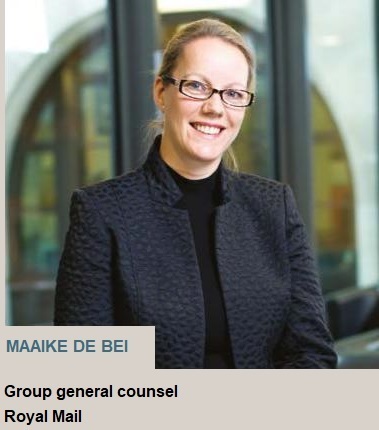 impacted on the company’s legal department, and in particular how it manages its panel of external lawyers.

Royal Mail is rather like Unilever House, the grand 1930s neoclassical Art Deco building it inhabits on the north side of Blackfriars Bridge.

From a distance, it is impressive, monolithic, inspiring nostalgia yet leaving the observer with a twinge of concern about whether such an edifice can survive the ravages of the modern world.

Go inside, though, and your preconceptions are turned upside down. The visitor can but marvel at the modernity, at how such an architectural institution has been repurposed.

Every glass-walled office overlooking the cavernous seven-floor high atrium is a hive of activity, clean lines and minimalist technology giving the impression of cool efficiency.

The transformational parallel, of course, is coincidental, yet it seems fitting for Royal Mail, and in particular the company’s legal department.

The Weight of History

Legal might have been the last thing on the minds of those choosing to privatise an organisation which had stood as a bulwark of the British establishment for 499 years, but the company’s legal needs are often large, often complex and sometimes unusual, as general counsel Maaike de Bie explains. ‘We have a very varied set of legal needs, beyond the usual corporate, property and IP,’ she says. ‘We have a lot of vehicles on the road, and that inevitably means accidents happen. Mail deliverers get bitten by dogs or get injured in other ways. When you have 150,000 employees, that’s a lot to keep track of. We are a regulated industry, so we have requirements on that level too, and we maintain huge numbers of contracts with all types of businesses, some of which raise their own legal issues, such as carriage of dangerous goods.’

In 2013, the £3bn privatisation of Royal Mail brought the organisation fully into the commercial world for the first time, and the legal department – historically more of a process-shop for personal injury and employment claims – was not equipped to handle M&A, finance-raising or competition issues. De Bie’s experience at EY, GE Capital and the European Bank for Reconstruction and Development made her the right woman for the job of transformation.

The department has reduced in size, from 140 lawyers to just 29, with personal injury and employment tribunal cases taken out of house. The remaining 29 are nearly all over 10 years’ PQE, with a few notable exceptions including a new trainee – the daughter of a postman who started this September as part of a revamped trainee programme. ‘Recruitment is very important to us, and I do insist that people have previous in-house experience,’ de Bie explains. ‘That might sound unusual or a bit narrow-minded, but people from private practice can struggle somewhere which hasn’t been a private concern for very long.’

The change in scope and possibility also meant that the Royal Mail’s old panel of external lawyers – just three firms, reduced from eight at the last review in 2010 – also needed a refresh. ‘Three was too few firms,’ says de Bie. ‘Sometimes they couldn’t cope with the volume of work we had for them, so this time we were determined to build a broader panel which would able to handle our existing work and deal with the new challenges.’

Equipped with the kind of heavyweight procurement processes required of public sector organisations, de Bie knew the tender process for the new panel, which took place in 2014, had to be meticulously planned and scrupulously fair. ‘We used a closed tender process,’ she explains, ‘inviting around 30 firms to pitch. It was an entirely level playing field, with no guarantees for any firms, either whether they would be picked or of any volume of work if they were. We had no intention of creating sub-panels, either, so everything was up for grabs.’

The process remained highly people-focused throughout. ‘We did focus on diversity and social responsibility, and what value you’d add to the company, not just “well, if you spend this amount of money with us you’ll get secondees”,’ says de Bie. Questions for the pitch were kept quite structured so that firms could be easily compared, but some did put in additional creative effort. ‘Some firms deliberately didn’t follow the format we’d asked them to, and we thought, well if you don’t follow that, what happens if we give you a piece of work, are you going to get it done in the way we want it done?’

‘I do find that with some lawyers, you ask them a question and they question whether you know what you’re asking and answer the question they think you should be asking, which is not always helpful,’ she notes. There were a few real blunders by firms during the pitching process, although de Bie is far too professional to name names. ‘One firm did use [rival] DHL to deliver their submission, which as you can imagine didn’t go down too well,’ she says with a rueful smile.

Fees were, naturally, important, and with an annual legal budget, quoted in the press, of ‘£10m-£20m’, there’s plenty of Royal Mail legal work to go around if firms play their cards right. ‘We made it clear that hourly rates would be the exception, and that fixed and capped fees would be the norm,’ she explains. ‘We did ask firms to put down a range of hourly rates for particular levels of qualification so that we had some basis for price comparison.’

‘We asked firms to be innovative on pricing. I don’t think anyone was very innovative in their answers. We’re willing to reward risk-taking but didn’t get any creative costproposals on that front. It would be great if there had been. My experience of dealing with law firms is that the innovation is often driven by in-house teams rather than the firms themselves.’

It was also important to get the department’s lawyers more involved in day-to-day financial management of legal fees, something which hadn’t been fully developed when the company was part of the public sector. De Bie has overseen the roll-out of a new e-billing system to give a better view of ongoing costs with, for instance, an automatic alert when billed time reaches 80% of the agreed cap.

‘I would expect all the lawyers to be on top of it,’ she says. ‘We spent a lot of time and energy on instilling financial discipline in our team, and that is something which doesn’t come naturally to lawyers, but some firms really don’t like the conversation, they don’t want to go there. ‘Accurate billing and prediction of budget estimates are absolutely critical,’ explains de Bie. ‘What we expect from our firms is good guesstimates. We do put pressure on them, ask them to work together with lead lawyer here to be quite clear what they will do and won’t do, and what they specifically don’t do – sometimes law firms are very over-enthusiastic and do all kinds of things you don’t want them do without asking first.’

‘When the work is outlined, we agree a fee. There are a few firms which push the boundaries a bit on that and what that tells us is that the lawyers aren’t that happy to work on that piece of work at that price, and so that informs our future decisions.’

Once the panel submissions had been goneover with a fine toothcomb, the initial list was then reduced to a shortlist for face-toface meetings, when the character of the firms was put to the test. ‘We let firms decide who they wanted to field for those meetings, and that was quite interesting too. Let’s just say there were some surprising line-ups!’

One relatively novel aspect of the new panel, which was introduced at the meeting stage, was the demand that law firm providers should work together. ‘We wanted to set up what we called a ‘Legal Community’,’ says de Bie, ‘get firms comfortable with the idea of working with one another, collaborate and work together, rather than to have us the different firms on our panel continually facing off against one another.’ De Bie smiles. ‘We didn’t tell them ahead of time that’s what we wanted to do, we told them during the face-to-face meetings, to see their reactions. It was quite interesting, though it has to be said that most people were really up for it.’

‘It was a little uncomfortable for some of them at first, but they have got over that and they work well together now,’ says de Bie. But the clincher, as time goes on, will be the firms’ attention to the value they are providing. ‘We don’t need a gold-plated service for every piece of work,’ says de Bie. ‘It’s about understanding how we perceive value. That is where the competitive tension we have in the panel works; if they low-ball deals and use very junior lawyers, for instance, that generates more work for us in-house, and that’s something we’ll keep in mind for next time.’​