AS ANTICIPATED, the Big 4 continued to expand their consulting practices rapidly with 65 Partners being appointed nationally across the Big 4 this year up from 50 the previous year.  Dwarfing other practice areas both in terms of promotion numbers and the bringing in of lateral hires, it seems that

diversifying into all facets of consulting is top of the agenda for the Big 4 accounting firms.  EY are the only exception to this trend, promoting conservatively into their consulting division with only eight appointed.

The multi-faceted nature of the industry encourages increased numbers of lateral hires as new skillsets and capabilities, that are often far removed from a traditional accounting background, are needed to execute this work.  Similarly to last year, there has been a huge appetite to expand into Strategy and Operations and Performance Improvement.  These two areas constituted 63% of all promotions in Consulting.  We have seen increased levels of lateral hires coming out of the strategy houses and boutique consulting firms, either as single hires, part of a team move, or a whole firm acquisition.

The Booz acquisition by PwC dominated this trend, but other significant team moves and high profile lateral hires were also prevalent.  KPMG and Deloitte both benefitted from picking up the Melbourne and Sydney teams respectively of Pacific Strategy Partners to expand their footprint into this space.

Data Analytics also emerged once again as a hot area with the continuation of the Big Data phenomenon providing a large amount of work for the accounting firms to compete for.  EY was the only firm not to promote in this area.  We were surprised to see that there were only a few pure IT advisory promotions made but we have found that, as we become more entrenched in the information era, it is often due to firms embedding these Partners into their Performance Improvement and Operations practices whereby they oversee large scale transformations with a technology or IT bent. 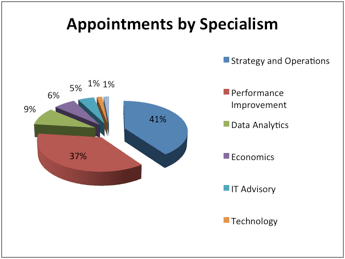 In terms of industry, Health and Government expertise dominated the landscape of Partner promotions suggesting exceptional levels of work coming out of these sectors.  This has contributed heavily towards successful Partner business cases.   Firms are also willing to invest in individuals with niche experience in these areas. Notably, KPMG brought in a lateral hires straight to their Partnership from The South Metropolitan Healthcare Service.

Location wise, Sydney and Melbourne dominated once again.  This is indicative of consulting at this high level being reserved for the large blue chip organisations and financial institutions which are based in these two hubs. Consulting fees tend to be at the high end of professional advisory fees, and therefore makes sense that only large blue chip organisations would have the expendable cash or desire to engage them.

It will be interesting to track the growth areas moving through 2014/15.  We predict that Mergers and Integration will be a hot area complimented by further Technology and Digital promotions and acquisitions.